Posted on January 23, 2014 by admin
NSV has urged Council to refer the West End zoning changes back for further work and meaningful involvement with the West End community. The full text of NSV’s letter to Council is reproduced below. The letter is also available in a file for download (PDF: NSV-West End Public Hearing Jan.23-2014).

Mayor Robertson and Councillors
City of Vancouver
453 West 12 Avenue
Vancouver, B.C. V5Y 1V4Dear Mayor Robertson and Councillors,
Re: West End Zoning Amendments Public Hearing January 23, 2014
Neighbourhoods for a Sustainable Vancouver is opposed to approval of the currently proposed zoning amendments of the West End.http://former.vancouver.ca/ctyclerk/cclerk/20140123/phea20140123ag.htm
The West End Neighbours (WEN) have listed many issues related to both process and product of this rezoning and clearly the community have not been given adequate information, analysis and opportunity for informed input for these zoning schedules to come forward at this time.
Some of the issues raised by WEN are listed in Appendix A attached.
These zoning schedules are complex legal documents. Each zone that is proposed for rezoning should have its own public hearing rather than trying to push them through together like this, which is taking a page out of the federal government’s playbook by passing one ‘omnibus’ zoning all at once.
Further it is unreasonable to expect a neighbourhood that is already very dense to take on this much when it will negatively impact their livability and put further pressure on the more affordable older rental housing stock. The population of the West End is 80% renters and this rezoning puts them at risk. The West End has about 30% of the city’s purpose-built rentals, the most of any neighbourhood.
Please refer this back for further work and meaningful involvement with the West End community.

On behalf of the Steering Committee

Neighbourhoods for a Sustainable Vancouver
Website: nsvancouver.ca
APPENDIX  A

Some examples of concerns raised by the West End Neighbours include the following.

Examples of a few of the items that are lined up for approval by Council through this Public Hearing:

·         Lower Davie Street is proposed to have increases in permitted tower height up to 20 storeys, and an increase in floor space ratio from the current 2.5 up to 7.0 FSR.

·         Along Lower Davie and Lower Robson, the City is proposing a reduction in the minimum required distance between towers (from the current 400 down to 79 feet), and residents could see up to three towers per block similar to the new buildings at Bidwell/Davie and Comox/Broughton.

·         Laneway buildings will be permitted up to six storeys in height along certain lanes in the West End.

·         New residential uses will be prohibited in Davie Village and on Denman Street, meaning mixed-use buildings will not be possible.

·         If these zoning changes are approved, there will be impacts on water/mountain/sky views, shadowing, and the character of the neighbourhood for several blocks around. Major construction also involves considerable disruptions to the neighbourhood. WEN believes that affected neighbours have not been meaningfully consulted about these changes or directly notified about the Public Hearing.

·         Once these zoning changes are approved, major projects in these zones will be able to go ahead without another public hearing. Development permits can be issued by internal procedure at the City, without any obligation to listen to the public.

Map of Existing Rental Buildings in the City of Vancouver 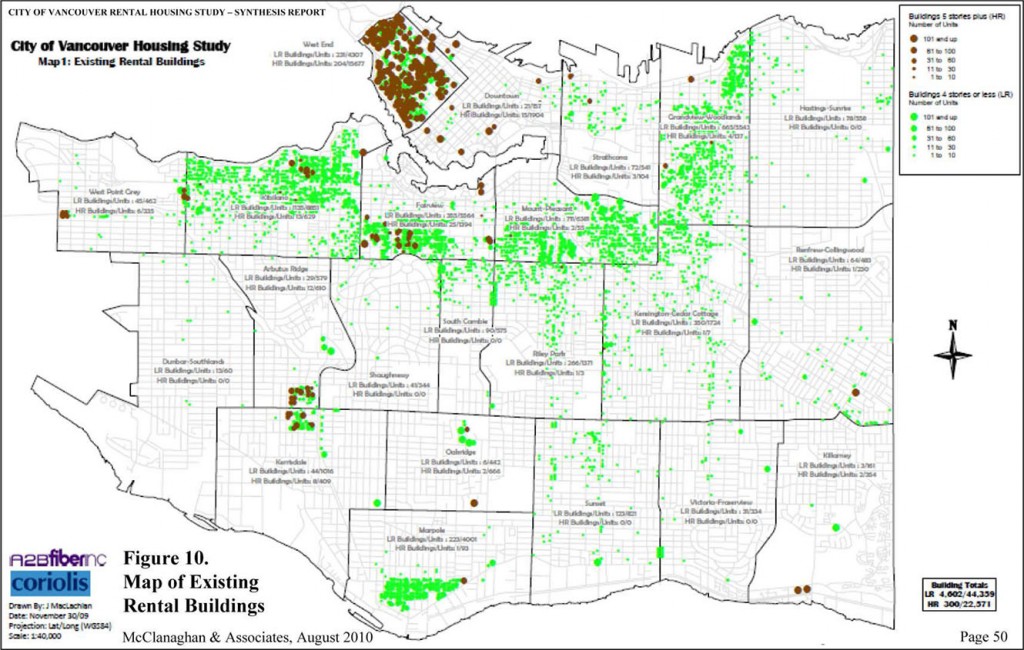