(Vancouver, January 20, 2014) Neighbourhoods for a Sustainable Vancouver today submitted a letter concerning the Municipal Campaign Finance Reform Motion on Notice at Vancouver City Hall. This motion will be introduced on Tuesday, January 21, 2014. NSV calls for deeper and quicker reforms to civic election campaign finance rules and the retention of a 3-year election cycle. The full text of the letter is reproduced below.

At a consultation with elector organizations on January 14, 2014, attended by Coralee Oakes, Minister of Community, Sport and Cultural Development, Minister Oakes stated that she very much wanted to respect the request of the Union of BC Municipalities to switch from the current three years to a four-year election cycle, effective immediately. She said she would be fighting to achieve this when legislation goes up for debate within just weeks from now.

During the public consultation on the White Paper, there was a footnote on the recommendation regarding the election cycle.

(8) UBCM subsequently passed a resolution to retain a three year term of office. The provincial government has agreed not to change the term of office.

The public has been led to believe that the four year term was not on the table, however, the most recent statement confirms the opposite.

Re:  City of Vancouver – Motion on Notice: “Response to Provincial Government on Municipal Campaign Finance Reform”

Neighbourhoods for a Sustainable Vancouver (NSV) has reviewed the subject Motion on Notice and is supportive of proposed measures related to campaign finance reform as set out in Appendix A, items 1-9 and 13 and with the following clarifications.

As regards remaining items 10-12 of Appendix A, NSV is also supportive of item 11, opposing any change of legislation that would provide corporations with voting rights in local elections.  Although we further support meaningful public consultation related to format and procedures of local elections, we do not support item 12 as currently worded and submit that any change to the current method of election must be decided by a well-informed public referendum.

Finally, as regards item 10, NSV is strongly opposed to any extension of the current three-year election cycle.

Notably, despite a clear balance of feedback opposed to an extended election cycle, the 2010 Local Government Elections Task Force recommended that the term of office for local officials be extended from three to four years.  Although the Province’s White Paper on Local Government Elections Reform, released in September, 2013, makes clear that “the provincial government has agreed not to change the term of office”, it is also clear that this position was predicated on a resolution passed by the UBCM in 2010 “to retain a three year term of office”.

Significantly, however, the UBCM subsequently reversed it’s position at its 2013 Annual Conference in September, supporting a resolution tabled by the Lower Mainland Local Government Association, despite recommendation by the UBCM Resolutions Committee to “not endorse”.   While NSV is presuming that the Province will remain committed to the position set out in the White Paper, we are concerned that the government could instead elect to act on the UBCM’s recent resolution, requesting “the provincial government to increase the interval between civic elections from three years to four years”.

Recognizing that the City of Vancouver was a party to the resolution tabled by the Lower Mainland Local Government Association, we wish to take this opportunity to oppose this resolution and to question the democratic basis upon which the resolution was advanced.  In particular, we are not aware that any significant public consultation has been undertaken by the City in relation to this issue since the provincial government’s Local Government Elections Task Force in 2010.

Consequently, and consistent with the majority of feedback received by the Elections Task Force, NSV is strongly opposed to an extended election cycle and believe that it would only exacerbate the profound disrespect for the balance of public opinion that is currently displayed by Vancouver’s elected officials.  The simple fact is that the majority of citizens are clearly not in favour of giving Vancouver’s mayor and city council a longer leash!

A 2010 survey by ThinkCity (in connection with the Elections Task Force) found that of 3,689 respondents, nearly 63% were in favour of retaining the three-year election cycle and 14% felt that it should be reduced to two years, compared with only 24% in support of an extended four-year cycle.  Moreover, in a written submission to the Task Force, the Canadian Taxpayers Federation observed that a four year cycle would mean 1) “voters lose out as their local politicians become less accountable”,  2) “less democracy at a time when citizens of British Columbia need more” and 3) “that politicians who may have lost the support of their citizens will hold the reins of power for even longer”.

For all of the reasons that unlimited campaign contributions are undermining public confidence in local governance, an extended election cycle would only compound the problem.  It is becoming ever more obvious to voters in neighbouhoods across Vancouver that our elected representatives are out of touch with public opinion and unwilling to listen.  The appearance is that the election cycle is the only remaining control the public has over our elected representatives and that it is currently too long rather than too short.  As for claims that elections are expensive, NSV’s view is that there is no better way to spend tax dollars in a democracy

On behalf of the Steering Committee
Neighbourhoods for a Sustainable Vancouver 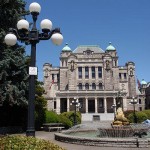