Some gains made for the Vancouver community in election

Neighbourhoods for a Sustainable Vancouver (NSV) thanks all those who have been engaged in the election process, and those who ran for office, for their substantial efforts to improve the governance of the city.

NSV notes that the outcomes of the November 15, 2014  election suggest that we can expect some very significant improvements over the current state of affairs.

A consistent theme of the election campaign was the lack of accountability at City Hall, with a continual chorus of citizens voicing concerns about how they are not being listened to. The message finally appeared to get through, as Mayor Gregor Robertson offered an apology in the final days of the election and related acknowledgement in his victory speech that he “heard loud and clear that there are things that we could do better and we will.”  But, it’s not entirely clear where the Mayor’s apology was directed and only time will tell if it translates into any real change in Vision’s style of governance.

The outcome of the election has reflected this theme in a number of ways. 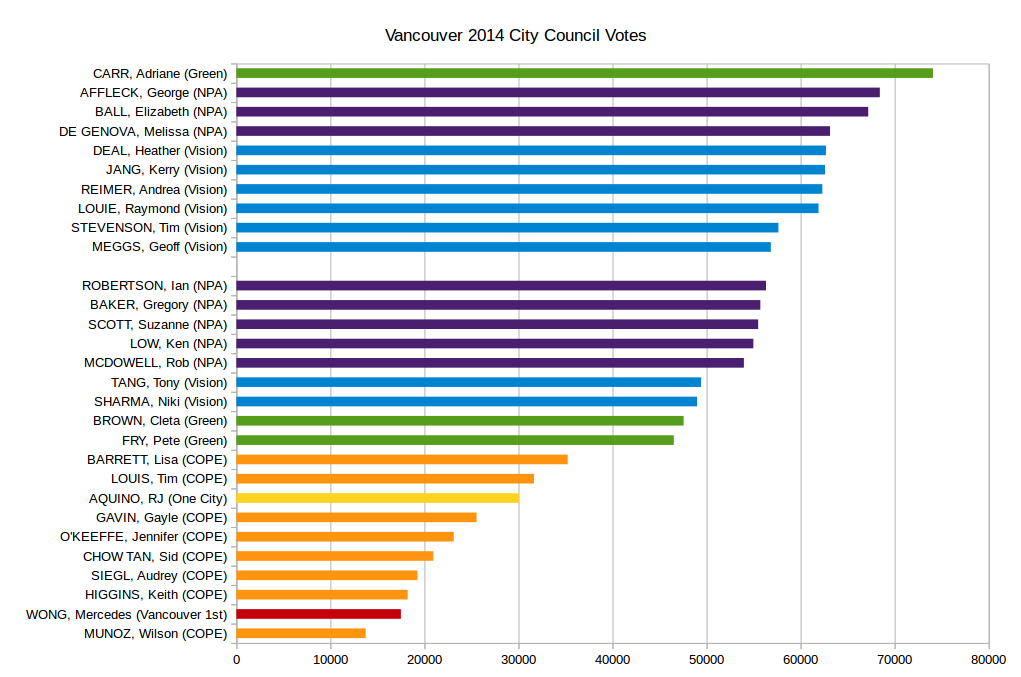 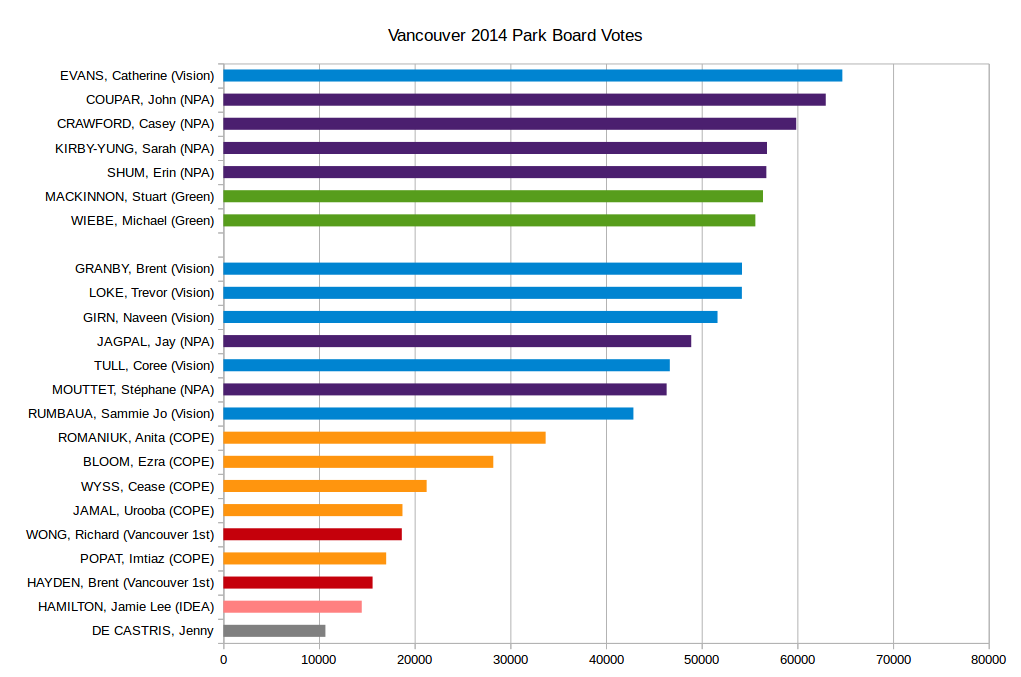 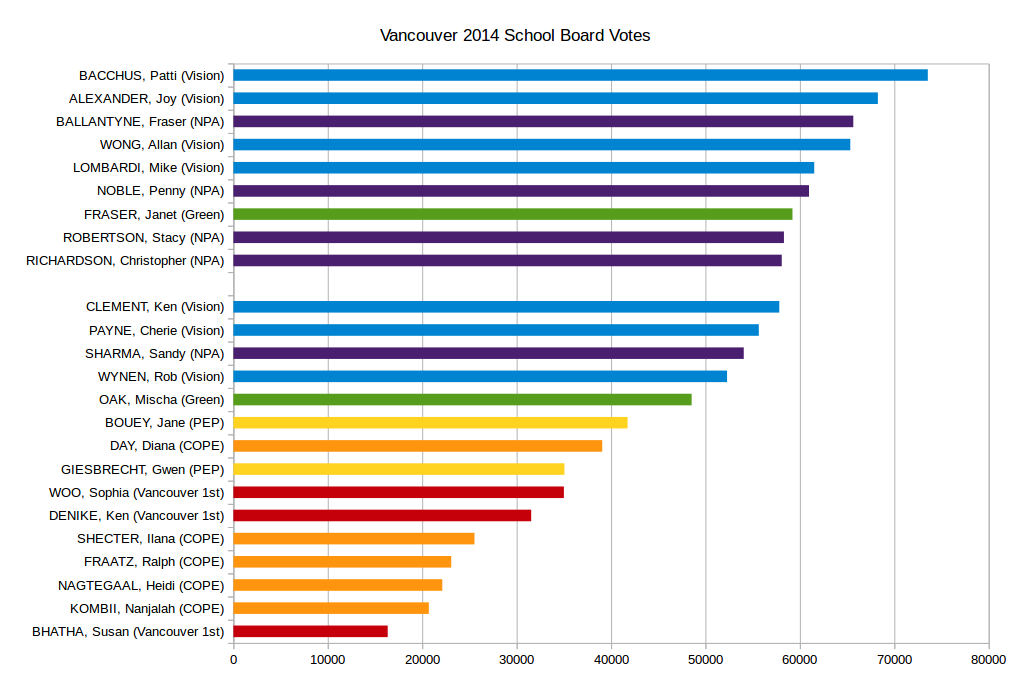 Vote spitting: The opposition to Vision was strong, but this opposition did not translate into corresponding seats. The  large non-Vision vote for Council (68.2%) was split between too many parties that ran too many candidates. Rather than helping to defeat Vision they helped to elect another Vision majority, with Vision receiving only 31.8% of votes cast. 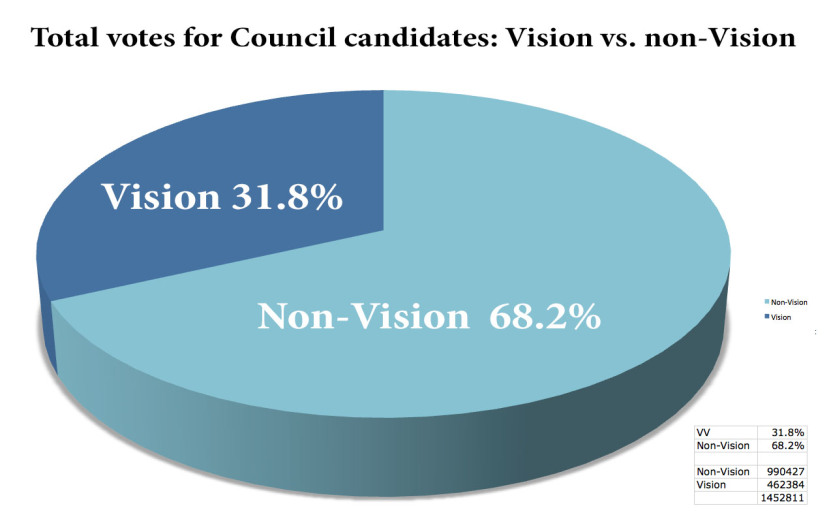 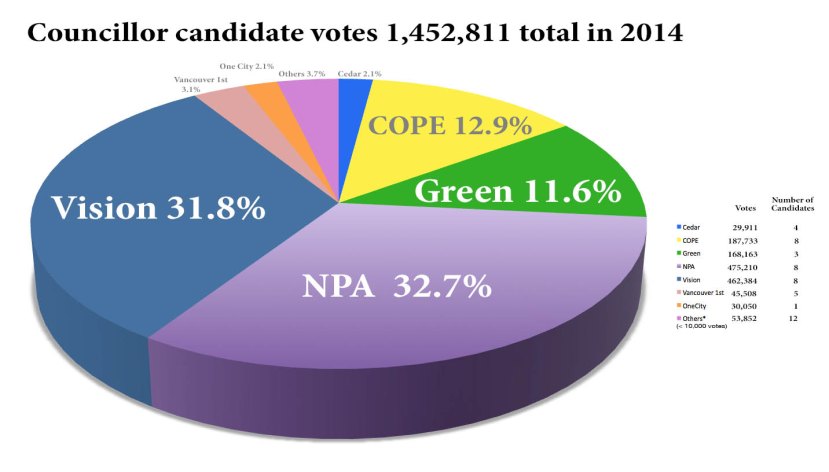 Many election day irregularities raise concerns about the integrity of the election process.

Several polling stations ran out of ballots, requiring long waits and some voters giving up and going home.

Many polls had long line ups of 40 minutes or more in the cold. In spite of the large voter turnout, many more may have tried to vote but may have given up because of the impediments.

CityHallWatch has written to Elections BC with concerns about election irregularities:
http://cityhallwatch.wordpress.com/2014/11/16/cityhallwatch-elections-bc-concerns/

Thank you for participating in the election to improve the city. 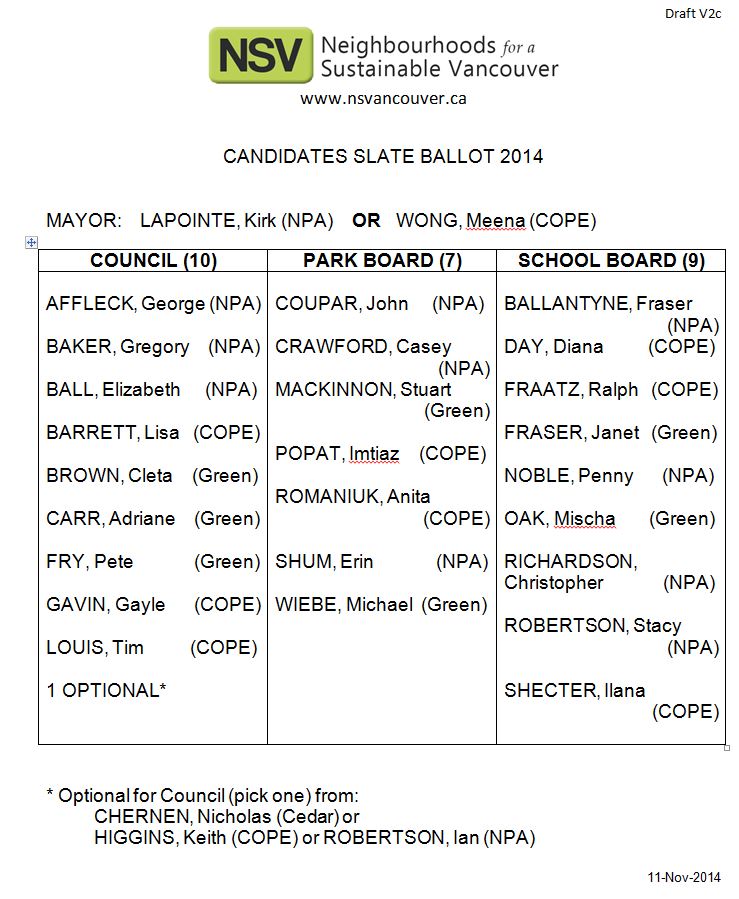 As a registered third-party sponsor for the 2014 civic election, NSV’s aim is to give a political voice to the view that it’s time for change and help make it happen by advancing a strategic slate of candidates for Mayor and City Council that…

Neighbourhoods for a Sustainable Vancouver is an independent Third Party Sponsor for the 2014 civic election and is recommending a strategic slate for change to reclaim democracy at City Hall.

BACKGROUND:
Neighbourhoods for a Sustainable Vancouver was formed in 2007 as an umbrella group to represent the shared concerns of neighbourhood organizations across Vancouver in response to EcoDensity, the first in a series of city-wide planning initiatives designed to circumvent established local planning and enable profit-motivated tower development beyond the city’s core.

In the run-up to the 2008 civic election, NSV conducted a survey of leading political parties and independent candidates to establish positions on key election issues, including EcoDensity. On the basis of Vision Vancouver’s claimed support for neighbourhood-based planning through CityPlan and a pledge to address outstanding public concerns around EcoDensity, NSV endorsed the Vision slate and looked forward to working with Vision Vancouver to chart a more sustainable way forward.

Speaking at a reception organised by NSV in wake of Vision’s success at the polls (see the start of this video at Heritage Hall, December 10, 2014), our newly elected mayor, Gregor Robertson, appeared to confirm our best hopes, noting that neighbourhood’s were… 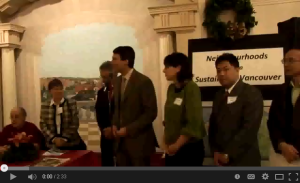 “the only thing, really, that pushed back effectively enough against the branding of EcoDensity.. and when you say the word EcoDensity, well, it sounds kinda good, sounds reasonable, something we maybe should get behind.. ,but the reality, I think, was very different.. and it took a very, very intense effort on behalf of all of you in the neighbourhoods to counter that effectively and to reframe the whole debate around what matters most and that is community and our neighbourhoods”.

Regrettably, however, the foregoing expression of appreciation and common ground was roughly the beginning and the end of a healthy and productive relationship between Vision Vancouver and the city’s neighbourhoods. We could speculate as to the influences both inside and outside City Hall that nipped the promise of good will and cooperation in the bud, but shortly thereafter “neighbourhoods” became “NIMBYs” and an obstacle to all the good that Vision Vancouver is determined to do for the real people of Vancouver.

Pointing to “convenient truths” from climate change to affordability, the following six years under Vision Vancouver have seen the City roll out a series of EcoDensity-like initiatives, enabling spot zonings across Vancouver to permit forms of development that are entirely out of scale and character with the surrounding neighbourhood. (Click here for our additional background on Vancouver planning, past and present.)

And the greater the local opposition, the clearer the view from the Mayor’s office and Vision-dominated Council chambers that local neighbourhoods are full of “political hacks” , “people who don’t want any change” or “regulars at City Hall”. 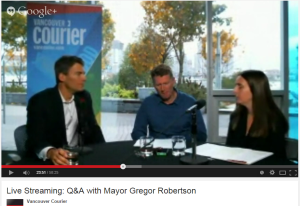 Most recently, Vision refused to endorse a set of principles and goals for neighbourhood-based planning recommended by the Coalition of Vancouver Neighbourhoods CVN, a group of 25 residents associations and groups. In a recently televised interview with the Vancouver Courier (see video at right), Mayor Robertson noted that the CVN proposal “doesn’t align with the City’s existing policy”, a fact already too clear to neighbourhoods.

What’s become clear to citizens across Vancouver is that community and neighbourhoods are no longer what matters most to Vision Vancouver. On the contrary, there is a growing sense across Vancouver that City Hall is out of touch with the balance of public opinion and that it’s time for change.

RATIONALE:
As a registered third-party sponsor for the 2014 civic election, NSV’s aim is to give a political voice to the view that it’s time for change and to help make it happen by advancing a strategic slate of candidates for Mayor and City Council that:

NSV’s view is that strategic voting is essential to restoring open and accountable government at Vancouver City Hall and that the following slate has the best chance of achieving that outcome. In addition to foregoing strategy, individual candidates were selected on the basis of 1) feedback provided to NSV through a candidates questionnaire (download PDF: NSV 2014 Mayor and Council Candiates Questionnaire), 2) support for NSV Basic Principles by associated elector organizations, 3) assessment of prior performance, 4) ongoing monitoring of views expressed through the 2014 campaign and, last but not least, 5) available polling data.

NSV acknowledges that there is a wider field of excellent candidates that could have been endorsed and we have suggested a number of options for the tenth slot on the ballot. However, again, we believe that the recommended slate has the best chance of succeeding and therefore encourage voters across the political spectrum to vote the slate.

To provide a measure of flexibility, NSV is recommending two candidates for mayor, either of which will advance our cause. And, finally (for those familiar with NSV), we are acutely aware that the strategy NSV is advocating is not entirely consistent with established views, but believe that the current state of affairs at Vancouver City Hall demands it.

Of the parties, the Greens have the closest platform to the NSV Principles and Policies, especially on campaign financing, so please vote all the Green candidates first. 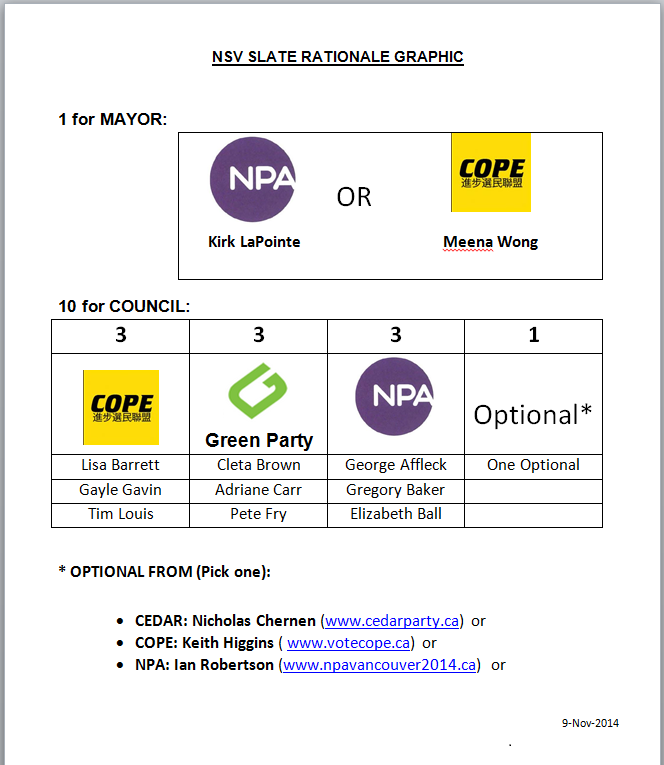 Neighbourhoods for a Sustainable Vancouver is a citywide grassroots network of neighbourhoods with roots going back to 2007. We are actively monitoring the situation in Vancouver, sharing information, providing support for neighbourhoods and citizens, networking, engaging in analysis and writing, and more. [For latest news see our NSV News page, or jump down below for intro to each news item.]

Neighbourhoods for a Sustainable Vancouver is a registered Third Party Sponsor to recommend a slate of candidates for the Civic Election 2014.

NSV’s current aim is to be a catalyst for broad electoral cooperation in 2014, to restore real democracy and public accountability at Vancouver city hall.   NSV is guided by a set of basic principles that we believe are essential to Vancouver ‘s future as a truly sustainable and progressive City of Neighbourhoods that reflects the diversity and values of its citizens.  With well-established roots as a city-wide neighbourhood network since 2007, NSV recommended mayor and council candidates in 2011 to give a political voice to these principles and to citizens across Vancouver demanding an alternative to Vision and NPA-dominated city councils with developer-funded conflicts of interest.

There is currently a rapidly growing consensus across Vancouver that City Hall is out of touch with the balance of public opinion, and NSV is determined to bring all those who share that view together in 2014.  The NSV Steering Committee will be evaluating candidates based on the following NSV Principles and policies (V19 – August 17, 2014).

Our objective is to recommend a full slate of exceptional candidates for Mayor, Council, Park Board and VSB that is strategic, dedicated to real democracy and representative of the broad diversity and values of Vancouver’s citizens and neighbourhoods.