Randy Helten runs for mayor with Neighbourhoods for a Sustainable Vancouver
By Yolande Cole, October 20, 2011
Straight.com

A Vancouver electoral organization says it wants to bring “real democracy” to city hall as it gets set to make its debut on the civic-election ballot next month. 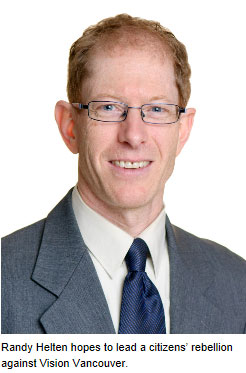 Community activist Randy Helten is running for mayor with Neighbourhoods for a Sustainable Vancouver, heading up a slate with four candidates for city council.

Helten, who has stepped down as president of the organization West End Neighbours to run for mayor, founded the watchdog websites CityHallWatch and MetroVanWatch. He said the group aims to reform the way the city is being run.

“A city is really defined by the ground that it’s on, and the most important function of city hall is really to regulate land use, because everything else really comes out of that,” he told the Georgia Straight by phone. “The way the city’s running needs to be reviewed by our whole civic society, particularly relating to corporate influence at city hall, and that comes down to campaign contributions and so on.”

NSV will only be accepting donations from individuals, according to Helten. The group also intends to endorse other council candidates in order to form a full slate before the November 19 election.

According to Murphy, the group’s focus is on independent governance and what she described as “real democracy”.

“What we want to see is more of an inclusive, grassroots process of decision-making, where neighbourhoods and people from neighbourhoods have a real say in how the city evolves,” she told the Straight by phone. “We support the fact that there will be growth over time. It’s more an issue of pace and scale—and who decides what that growth will look like and how it will evolve—and ensuring that the communities have a significant impact on how that is implemented over time.”

When Helten was initially encouraged to run for mayor, he recalled thinking that the idea was “ludicrous”. He said it wasn’t until the deadline day for filing nomination papers that he decided to go for it.

“It became quite clear that there was no one really going to, especially in the mayoral roles, call for fundamental change in the way the city’s run,” he claimed.

Helten doesn’t deny that his group will face a tough challenge in going up against the city’s major political parties, Vision Vancouer and the Non-Partisan Association. “It’s one David against two Goliaths,” he said. “We do not have a $2-million campaign budget and professional spin masters. We’re just trying to speak the truth, and say things as we see them.”

Another group seeking seats on city council in the November civic election is De-Growth Vancouver, an offshoot of the Work Less Party. This slate is also focusing on grassroots democracy as part of its platform.

“What tends to happen in Vancouver— and it’s not unique to Vancouver—is that the one-size-fits-all, cookie-cutter policies are dictated by city hall downwards,” Chris Shaw, one of three council candidates with De-Growth, told the Straight by phone. “Not all policies fit all communities in the same way, so we really believe that communities have the right and indeed it is the best solution for communities to decide, for example, on bike lanes.”

Shaw, a UBC neuroscientist who was a leading critic of the 2010 Olympics, said the group’s main focus is on decelerating economic growth.

“It is probably not a popular notion, and it’s certainly not one that any of the mainstream parties will talk about…but it’s one that needs to be talked about is how do you decelerate the economy rather than [growing], because growth in our view leads to degradation of the environment and our place in that environment,” he said.

De-Growth’s proposals also include a shorter work week and the expansion of city bike lanes.