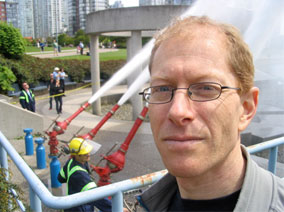 Not a lot of people in Vancouver consider mayoral candidate Randy Helten a household name, but that might be about to change. A former Vision Vancouver member, Helten was the guy at the center of the “effen NPA hack” controversy that caused headaches for Gregor Robertson about a year ago.

If you recall, Helten and a few other community activists presented to Vancouver City Hall about their concerns regarding the pace and scale of development happening in the West End. Once the meeting was over and the cameras were off, Robertson was caught on tape slagging the presenters. He said:

Who are all those f*cking…who are these hacks man? Are they…Are they NPA hacks? You know?

Amazingly, the infamous audio tape/video now has over 56,000 views on YouTube.

Here is a link to the CityCaucus.com story we wrote back in July 2010.

Now Randy “hack” Helten has decided to leave Vision Vancouver and start up his own party called Neighbourhoods for a Sustainable Vancouver. But more importantly he has decided to take on Gregor Robertson for the top job of Mayor of Vancouver.

What’s most interesting about Helten’s campaign is that he will have loads of appeal to the average COPE voter in addition to disaffected Visionistas. In other words, by default he ends up becoming the COPE mayoral candidate they never nominated.

If you’re a COPE supporter and can’t bring yourself to vote for either Suzanne Anton or Robertson, it looks like you have found your mayoral candidate.

As for Helten and his anti-development group, they likely won’t have enough gas in their tank to elect anyone in this upcoming election. After all, they are facing the Vision & NPA campaigns which will be spending in excess of $4M to secure victory. I suspect they are simply hoping for a good showing in this civic election as a means of preparing themselves for the 2014 civic rematch.

According to the NSV website, they have serious concerns regarding the lack of consultation happening at 12th and Cambie:

Time after time, City Council is approving projects despite opposition from the majority of views expressed from the community.

Helten and his team have a very well laid out set of principles which can be found by clicking here. If you didn’t know it, you’d think it was the COPE manifesto! Hence the reason why Helten will have so much appeal to COPE members & supporters.

It will be interesting to see how much of a factor they will actually be in the coming weeks. But more interestingly, will Robertson be prepared to go head-to-head with Helten at a public debate? If so, will he be brave enough to refer to him once again as an “Effen NPA Hack”?

I’ll also be curious to see who COPE candidate Tim Louis finally announces will get his vote for Mayor of Vancouver. Something tells me a guy like Helten might have a lot of appeal for him!

CityCaucus.com will be reaching out to Helten in the coming days to see if he is interested in writing a guest post and doing an interview. We’ll keep you posted!