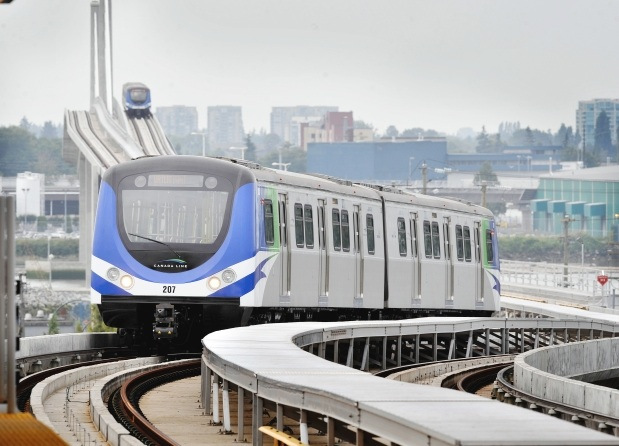 Opinion: If Victoria and Ottawa don’t pay, property taxes and development fees are diverted from other programs

TransLink’s Canada Line trains were already at capacity at peak hours when it first opened for business. Photograph by: ian Lindsay , Vancouver Sun

It is time to dismiss this model and look at sensible options, with broad consideration of more affordable transit alternatives.

Public transit is a very important part of the city’s infrastructure and needs to be expanded. However, transit is a provincial/federal funding responsibility that would be transformed into a development regime and cash cow for TransLink at city taxpayers’ expense if development is used to fund transit.

The city uses fees from development (such as development cost levies and community amenity charges) to fund civic infrastructure like daycare, parks, community spaces, heritage and affordable housing. These development fees cover only a small part of the cost of servicing the new developments. It is not well known that the majority of these costs are paid by city taxpayers through property taxes and borrowing through the city’s capital plan.

Every year the city borrows hundreds of millions of dollars to finance and subsidize growth. Fees from development projects help to offset a small portion of the costs of growth. However, if fees from development are used to fund transit, the city will lose that source of funding. Civic costs to service new development would also increase to match that imbalance.

There is a mistaken belief that development fees from creating density is free money from selling air, but in truth all new density is subsidized by taxpayers who pay for the supporting infrastructure and services.

While city policy recognizes the need for other public amenities, the unspoken but well-understood reality is that rapid transit is so expensive it will cannibalize all potential for funding of civic amenities from development, while creating additional costs from development to be subsidized by city taxpayers. This amounts to provincial/federal downloading onto municipalities.

The provincial and federal governments get 93 per cent of the tax base, leaving municipalities with only seven per cent. It is time that senior levels of governments fulfil their obligations to provide funding for transit.

Transit funding should be structured as an incentive to drive less and/or improve vehicle efficiency.

One option could be a variable vehicle fee based on mileage driven and fuel efficiency of the vehicle, which could be collected annually with our insurance premiums. This would be much easier to administer than the complexity of road pricing without the privacy concerns arising when vehicles are tracked through GPS or tolls.

Other options include carbon and gas taxes. A larger portion of these taxes should be used to fund transit.

Vancouver was built as a streetcar city before widespread use of the vehicle. That system was subsequently replaced with the electric trolley bus. The entire city is laid out on a grid putting most areas within easy walking distance of an arterial with transit.

If transit funding is funnelled into only a few very expensive corridors, service in the rest of the transit grid will be reduced, neglected and inadequate.

We saw this when the Canada Line was completed. The electric trolley bus on Cambie was replaced by a reduced service diesel bus and the service along Granville Street was also reduced. Subway stops are far apart so that, even along this tremendously expensive transit line, there is limited service for local destinations including Cambie Village which has no station.

Transit-oriented development has merit in the right context. The location and scale of development should be under the full control of local communities and allowed to grow in concert with local community plans. Civic developments should not be influenced by the province to fund TransLink or any other provincial responsibilities such as the retractable stadium roof replacement.

The Canada Line was already at capacity during peak hours when it was first opened, even without upzoning. There now are reports of people in Vancouver who take the line southbound to Richmond so they can get a seat northbound to downtown, since trains are often already full by the time they leave Richmond into Vancouver.

Even if in the future more trains are added at peak times, the Canada Line is limited in expansion at stations by load capacity. It is questionable if transit will be able to service the increased ridership from the massive proposed development along the Cambie corridor and in Richmond. There is a danger that excessive upzoning could result in even more people using cars instead of the overcrowded transit system.

The Broadway corridor could be even more problematic. If the area is prematurely upzoned in anticipation of a future subway, the increased ridership would overwhelm the already inadequate transit system, with the subway not being completed for decades, which happened to Port Moody in anticipation of the long delayed Evergreen Line. The current proposal in the draft Grandview plan for 36-storey towers at the Broadway and Commercial transit choke point is a case in point.

In summary, using development or property taxes to fund transit should be taken off the table since this model would download provincial/federal responsibility onto the city. Consider a mileage/emissions-based vehicle fee, carbon and gas taxes instead. Keep land use within the scale and character of each neighbourhood in accordance with community-supported local area plans. To be viable and sustainable transit must be electric, convenient, affordable and appropriately funded.

Elizabeth Murphy is a private sector project manager and was formerly a property development officer for the City of Vancouver’s housing & properties department and for BC Housing.