We all love to scoff at sensational, low-brow journalism — perpetually rehashing past scandals, eluding substance.

But when Mayor Robertson dismissed a critic last summer with the following infamously recorded words, who knew the guy would come back for revenge on the campaign trail: “Who are all these fuckin’ — who are these hacks man? Are they they NPA hacks?”

But how else could one begin writing about Randy Helten’s campaign for mayor — and his upstart Neighbourhoods for a Sustainable Vancouver (NSV)’s bid for council — without referencing what he calls “the f-bomb incident.”

Quixotic spoilers, some would say. David versus Goliath: another, more sympathetic, cliché.

So let’s get to some substance: Helten told rabble.ca that what offended him wasn’t His Honour’s cussing, but what was behind it. It was Robertson’s follow-up mockery of the public consulation process:”God, we’re just tryin’ to have a little advisory committee, for fuck sakes.”

And that, Helten adds, is an attitude that should push Robertson from office.

“The bottom line is trust,” Helten says, recounting the mayor’s July 10, 2010 gaffe, as he sips on a triple-shot black Americano in a West End coffee shop. “I had no emotion — I wasn’t personally insulted or outraged. All it did was double my passion.”

“My whole message (that night) was that the global financial meltdown in 2008 was based on a collapse of trust — it was a failure of trust in the financial system. I said that we need to be able to trust City Hall. But the result was they completely ignored our input, and we ended up getting called ‘fucking hacks.’ The mayor had just become a part of the system.” 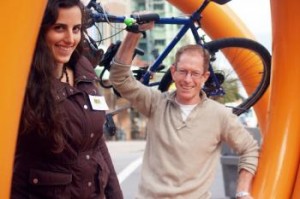 But Helten — the West End Neighbours activist behind City Hall Watch — insists he isn’t after vengeance. So when NSV endorsed all of the Council of Progressive Electors (COPE)’s candidates, the Greens’ Adriane Carr, Independent Sandy Garossino — and, better yet, the Non-Partisan Alliance (NPA)’s Bill McCreery — how could this not be taken as another resentful jab in Vision’s eye? Because it’s all about their policies and principles, Helten said.

With the centre-left COPE defanged by its electoral alliance with its ungrateful progeny Vision Vancouver (my words, not Helten’s), the bespectacled business-major-turned-eco-activist-turned-neighbourhood-campaigner said Vancouverites need a progressive alternative voice — one with the guts to stand up to developers. Both Vision Vancouver and the NPA receive the majority of their roughly equal $2.5 million election budgets from developers and real estate marketers. NSV’s budget is closer to $25,000, Helten says — literally one per cent — which is interesting considering the Occupy movement’s talk about the richest one per cent versus the 99.

“Vancouver is one of the best places,” NSV council candidate Nicole Benson, a 27-year-old social justice activist, told rabble.ca. “But if we just allow special interests to to overrun the whole city, I don’t think it’s going to be the same in the future.”

“We’re not anti-development — we’re just anti-undue influence of development companies on the political parties. Developers should have one seat at the table. Voters are tired of the stuffed-up suits.”

Basically, NSV’s platform comes down to neighbourhood control over decisions affecting them — within certain parameters, Bensons adds. So while there would be obvious pitfalls to allowing residents to veto controversial projects like prisons, transit hubs or addiction services for instance — the Not-In-My-Backyard (NIMBY) factor — Helten argues that the status quo is City Hall lording it over neighbourhoods, making decisions with rubber-stamped consultations. The slate also will push for electoral reform, including campaign spending and donation limits.

“NIMBYism is an easy way to write somebody off, or calling someone a believer in conspiracy theories, because they’re so hard to prove,” he says. “You need to follow the money, and the money is coming largely from the developers, but also from unions and from charitable organizations with very strong ideologies.”

“It’s as if elected officials and the parties behind them are addicted to campaign contributions, and everyone is enabling it. Ultimately everybody is suffering and paying the price. (They) are incapable of changing the system because they’re dependent on it.”

Benson, leaning across the table, jumps into the conversation with ease.

“In Vancouver, neighbourhoods are being ignored,” she says. “Unfortunately what we’ve seen in the last three years is Vision consistently supporting the big developers and voting together as a block in these decisions.”

“But it’s time for people to take a stand. The decisions shouldn’t be made before those conversations even happen.”

Of course, NSV has many critics on the left and right alike. From the right, the party’s insistence it is neither left nor right and its “neighbourhoods first” rhetoric is viewed with suspicion — and considering leftist parties got all but one of NSV’s endorsements, this would seem valid. In fact, NSV candidate Terry Martin moved to the party after an unsuccessful attempt to be nominated on the COPE ticket last June. NPA-backing City Caucus blog’s Daniel Fontaine wrote: “If you’re a COPE supporter and can’t bring yourself to vote for either Suzanne Anton or Robertson, it looks like you have found your mayoral candidate.”

From the left, NSV’s campaign is seen as dangerous because it risks handing the election over to the much-further-right-of-Vision NPA by splitting progressives’ vote. That fear is behind COPE’s crucial electoral alliance with Vision, said COPE councillor Ellen Woodsworth, who said Vision and COPE may differ on some issues around development and housing, but share broad values.

“Any time we split that vote, we lose,” the veteran activist and politician said in an earlier interview with rabble.ca. “If you don’t vote for all ten COPE-Vision candidates, it basically goes to NPA.”

“The right-wing development party usually have the majority at City Hall. It’s only when the centre-left came together that we won.”

COPE candidate and former councillor Tim Louis — who opposed the COPE-Vision alliance when it was proposed — was a more circumspect when rabble.ca phoned him. The veteran lawyer-turned-lawmaker ruffled some partisan feathers earlier in the campaign when he told the Georgia Straight: “I’m going to be voting for people that I can work with. (…) Terry is certainly somebody I could work with.” You can make your own inference from this — the Straight certainly did.

With the election only three days away, Louis stayed well clear of that terrain today, saying he simply gives kudos to any party when it’s due.

“NSV are raising some very important issues,” he said. “I tip my hat in that regard.”

“Whenever any party raises issues important to electorate, I’m the sort of person who believes politicians should give credit where credit is due. I’ve said many times over the last years that developers have far too much influence on city council. The developers are trying to purchase the outcome of the election.”

Benson dismissed fears that NSV will split the left vote, saying that Vision has proved it is as much a developer-funded party as the NPA.

“If you want to see change, you have to be the change,” she said. “You don’t pick the lesser of two evils — you actually pick no evil.”

“But we do support COPE — a lot of our policies are very much similar to theirs, and we hope we can work together with them.”

Helten, 51, studied commerce before moving to Japan in 1988, where to this day he continues his long-time role as chair of Friends of the Earth Japan. Frustrated with a sense of powerlessness at global climate negotiations a decade later, he restarted his activism on a smaller scale: his neighbourhood. Now he says he has realized how most problems — whether at the international or civic level — stem from disproportionate influence of moneyed interests on politicians.

Benson, who recently started a language teaching business and works with a Mexican Indigenous solidarity group, said she is still adjusting to being in the public eye — but says that, in spite of her anxiety about being on television, she felt a need to be “courageous” in acting on her convictions.

“That’s why the people are at the art gallery, that’s why the Occupy movement is happening, that’s even why the Arab Spring happened — people feel they have no other way except to literally shout and scream until they’re heard,” she says. “But it’s time for people to take a stand. That’s what the Occupy movement is about and that’s what NSV is about.”

“I don’t have a lot of experience in the political realm, but I’m so upset by what I’m seeing that I feel I have a real chance here to make a difference. I am having the courage, because we all have to if we want to see the changes that we want to see.”