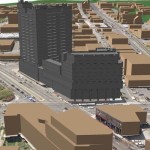 This article by NSV’s Elizabeth Murphy was published in the Vancouver Courier on May 2, 2012.

The Rize at Broadway and Kingsway in historic Mount Pleasant was approved April 17 by Vancouver city council, opposed only by Green Party Coun. Adriane Carr. Minor amendments approved by council will not meaningfully address the issues raised by 139 speakers over six nights of public hearings.

The city’s lack of response to the groundswell of Mount Pleasant community concern is a sign of systemic failure. As one resident at the hearing commented, council’s approval of the Rize is like a one finger salute to the East Side of Vancouver.

Most of the pushback came from the local community, but Neighbourhoods for a Sustainable Vancouver (NSV) also backed the community opposition. This project has the potential to set a city-wide precedent at a time when four other community planning processes are beginning—in Grandview, Marpole, the West End and the Downtown Eastside.